Who Was Albert “Shrimp” Burns? 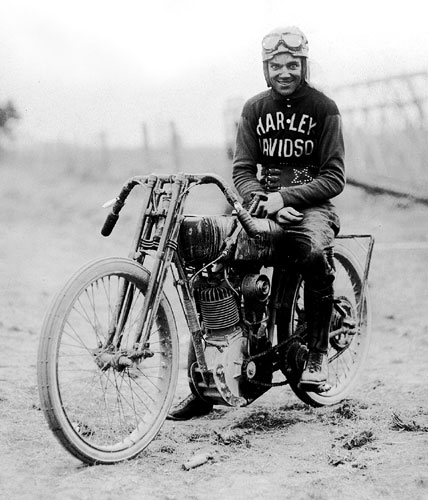 Some of the toughest individuals in the world reside between the pages of motorcycle history. Albert “Shrimp” Burns, a rider for both the Harley-Davidson and Indian motorcycle companies, exemplifies a tough, passionate rider.

How Did He Get Started?

Born in 18998 in Oakland, California, Albert Burns got an early start in the world of motorcycles. He enjoyed spending time at a local motorcycle shop, where he got his first job at the age of 12. Like many other motorcycle racers, he began riding for the sake of delivering messages and developed a taste for it. The shop periodically allowed him to ride the motorcycles for fun, and his skill rapidly improved.

Later, at the age of 15, Burns raced for the first time in Sacramento, finishing fourth. Older, more experienced riders were not happy to be outperformed. Consequently, many of them refused to let him race with them.

Burns did not let this cold welcome prevent him from entering races. He soon earned the nickname “Shrimp” for his small stature but tough spirit. Later in 1913, Burns won his first race, triggering a series of wins for the next 8 years.

Like many other riders of the time, Burns was a notable Board Track racer, a particularly dangerous form of motorcycle racing. Sharp, splintery boards, little protective gear, and high-speed racing caused many a racing injury. Nevertheless, Burns continued racing throughout California, winning countless races.

In 1919, after a brief pause in his racing career caused by the war, Albert “Shrimp” Burns signed with Harley-Davidson as a professional rider. He represented Harley-Davidson during the 1919 200-mile championship in Marion, Indiana. He continued racing throughout the United States, displaying a passion for the track and an unbreakable spirit.

In 1920, strained relationships within the Harley-Davidson team caused Burns to sign with the Indian motorcycle manufacturer. He took first place in several notable races that season, but it wasn’t all smooth riding.

Throughout his racing career, Albert “Shrimp” Burns took numerous hard falls. In one Marysville race, he crashed during one race, fixed his motorcycle in time for the next, and won it, all with a broken shoulder and fractured collarbone. Again in 1921, Burns crashed into the wooden Board Track, tearing up both his machine and his skin. Instead of quitting, he bandaged up his arms, borrowed a teammate’s motorcycle, and went on to win the final race.

Unfortunately, Burns was not able to tough out every race. On August 14, 1921, in Toledo, OH, Burns hit the rider in front of him and crashed into the railing. He died of significant head trauma at just 23 years old. He was to be married to Genevieve Moritz in a month.

Although Albert “Shrimp” Burns’ life ended far too soon, he serves as an inspiration. Within the next few years, Board Track racing would become a thing of the past. The lives of motorcycle riders were more important than the thrill of danger. In a way, the loss of Albert Burns emphasized the need for advancements in the racing industry.

In 1998, 100 years after his birth, Burns was inducted into the AMA Motorcycle Hall of Fame. He continues to exemplify a tough, passionate racer and inspires many people today.