Who Was Joe Wolters? 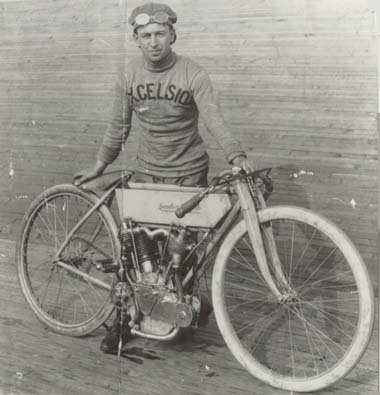 At a time in history when motorcycle races were the most exciting event to attend, Joe Wolters entered the scene and made history. A valued team member of both Harley-Davidson and Excelsior, Wolters took his share of spills but kept a smile on his face.

How Did Joe Wolters Get Started?

While there is not a ton of information regarding the early life of Joe Wolters, he pops up in countless historical photos. He is right in the thick of some of history’s most exciting motorcycle races. First beginning his racing career in 1906 at a Denver race, Wolters quickly rose up as one of the top competitors in board track racing. He represented big brands and debuted Excelsiors motorcycles. He didn’t pay around, either. Many years after his retirement, Wolters is quoted as saying, “If there was a bunch [of riders] up ahead of me on the track, I’d never go for the fence – never…I’d try to find an opening and break through a bunch of rival drivers, even if it meant ramming a couple of competitors.”

Wolters certainly wasn’t afraid of a good “ramming.” In the early 1960s, he recalled having been in 53 motorcycle racing accidents throughout his short career. It was short because he disliked how dangerous it became. Many racers were dying on the track, and he decided to move on. However, he made a name for himself first.

Although he broke countless bones and sustained countless injuries, one of the more famous motorcycle crashes of the time occurred when Joe Wolters drove head-on into a plane. Yes, you read that right! During a 10 mile race at the Motordrome, Wolters remained focused on victory. However, he wasn’t so unfocused that he failed to notice the biplane being flown by aviator Didier Masson near the racetrack. According to a later account by Wolters, he briefly thought to himself, “I hope he doesn’t try to land that plane on this track.” Then, he went on to finish his final lap.

Wolters won this race. However, moments after victory, he turned the bend to see that the biplane had indeed landed on the track. Wolters crashed through the plane’s propellor and immediately fell unconscious. He was taken to the hospital where he woke up 2 hours later with a fractured skull and lots of bruising. Still, he went home that very night with a great story to tell!

What Did Joe Wolters Accomplish?

From 1906-1921, Joe Wolters spent his days crushing pretty much every racing record he could find. His speed, precision, and passion were so impressive that he became a prime candidate for representation. He was one of the first riders in the country to represent Harley-Davidson as a team member. He also represented Excelsior in countless races, including the 1919 Cornfield Classic in Marion, IN.

However, Joe Wolters’ racing career was never about the flashing lights. In truth, Wolters simply loved adventure. After he deemed racing a little too “dirty” for him in 1921, he went on to pursue another passion: ice skating. Yes, not only was Wolters a killer on wheels, he was graceful on ice. He spent years traveling and putting on ice shows, as well as teaching ice skating lessons even into his 80s! He certainly lived for speed. The legacy of Joe Wolters inspires individuals of all backgrounds to seek what thrills them most and to not be afraid of following your dreams.