Who Was Otto Walker? 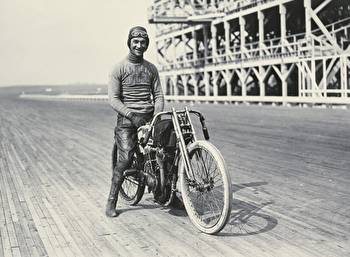 Harry Otto Walker was born on July 4, 1890, in the bright state of California. Eventually, he would become one of the original members of the Harley-Davidson Wrecking Crew, but he set a lot of records and inspired countless people along the way.

Like most motorbike enthusiasts of the time, Harry Otto Walker (usually referred to as “Otto”) got an early start just as the industry began taking off. Walker’s racing career officially began in 1911 on the seat of an Excelsior. Although he did not immediately win trophies, awards, or notoriety, Walker steadily improved, and he was known for his friendly countenance and love for racing. From 1911-1915, Walker increased his speed and racing skills. In 1913, he won the 10-mile amateur championship race put on by the Western Federation of Motorcyclists.

In 1915, Otto Walker was asked to join the Harley-Davidson racing team. It was here that his career took off. During one 300-mile, 1915 race in Venice, Walker rode alongside Harley-Davidson team captain Leslie “Red” Parkhurst in an exciting and jarring battle. The two riders remained close to one another throughout the entire race, with Walker pulling ahead and winning by mere feet at the end. The race was so intense that Walker’s motorcycle was covered in blood by the end, which dripped from Walker’s nose due to the speed and vibrations of his machine. Together, Walker and Parkhurst represented the thrill and adventure of the Harley-Davidson company.

After sustaining a leg injury that kept him from participating in the majority of the 1916 racing season, Otto Walker turned to more serious business. World War 1 secured many brave motorcyclists around this time. Joining countless fellow racers, Otto Walker put his racing career aside for the time being. Otto enlisted as an aviation mechanic in 1917 but raced one last time before moving to France. In this final race (pre-enlistment), he set a 24-hour record spanning nearly 1,160 miles at the Sheepshead Bay Speedway.

We know little about Walker’s role as an aviation mechanic during the war. However, he did obtain an interesting souvenir that became quite well-known upon his return in 1919. A German pilot’s leather helmet took the place of Walker’s old racing helmet. The German style was quite distinctive and controversial amongst other riders. Nevertheless, Walker wore his souvenir proudly, and through it became recognizable in packs of racers.

Upon his return from the war, Harley-Davidson quickly reinstated Otto Walker as one of their representatives. In February of 1921, Walker set an astounding record. He became the first-ever racer to win a race while maintaining an average speed of over 100 mph. This remarkable event occurred at Fresno Speedway on the same day that Walker beat the record for most races won at a single event.

In 1922, Otto Walker broke six records at the Beverly Hills Speedway but retired at the end of the season. Although he did not spend his entire life racing, the races he participated in made history. Today, we remember Harry Otto Walker in the Motorcycle Hall of Fame. His legacy continues to impact the modern motorcycle industry.