Who Was Roy Artley? 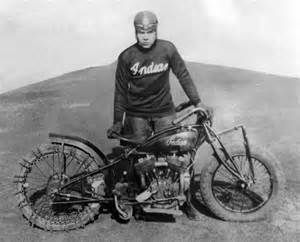 All throughout the history of motorcycle racing, countless riders have made their impact on the industry. No matter who they rode for, which records they set, or what drove their passion, their performances echoed (and continue to echo) the sentiments of motorcycle lovers everywhere. Roy Artley, an early racer from 1910-1921, was one of these men. Who was he, and what did he accomplish? Let’s take a closer look.

Every famous racer of the time had to get a start somehow. For some, it was as a boy on their father’s motorbike. For others, it was delivering messages or mail throughout their town. Roy Artley grew up in San Diego and actually began riding as a fine china delivery boy. He carried the china in a bag slung over his shoulder, and of course, he had to ride exactly right so that the china would not break. As he drove his Thor motorbike, he would practice sliding around curves and bends – a dangerous venture for a fine china delivery boy!

Eventually, Artley switched from china delivery to mail delivery, a much safer job for a boy with a motorbike and lots of spirit. It was in 1912 that he began to race locally, and he placed in his very first San Diego race.

It wasn’t long after he began racing locally that Roy Artley began racing nationally. His practice as a delivery boy paid off, and he became particularly skilled on the dry, desert roads of San Diego. His first national race was a long one between San Diego and Phoenix, a dangerous desert race filled with the risks of dehydration, encounters with Native Americans, and potential “desert road robberies.” Despite the challenges, Artley finished 5th and quickly became well-known as he entered more and more races.

In 1916, the Indian Motorcycle Company hired Artley to represent its brand, and he began his days of record-setting. He raced in all of the Indian-specific races, such as the Cornfield Classic. He was a speed machine and loved to win. In 1917, when he rode for Henderson, he set the sidecar world record by riding 706 miles in 24 hours. While many other riders of the time tended to focus their attention on board track racing, Artley loved long-distance riding. He set out to beat countless city-to-city riding records, such as San Fransisco to Los Angeles in just over 10 hours. He did this until 1919 when the racing industry began slowing down.

A Determination that Defies All Odds

One notable race of Roy Artley was his ride from Springerville to Phoenix. At one point, he ran out of oil. At another point, a gas attendant mistakenly filled his tank with water instead of gas. Despite these setbacks, he still managed to keep his lead and win the race. Of course, once the war came, the racing industry slowed down. While it came back with a bang, increased traffic on city roads prevented long-distance riders from experiencing the same freedom as before.

In 1921, Roy Artley decided to retire from his racing career, finishing 7th in his very last race. However, his records and story continued on, evidenced by the old Henderson ads that continue to surface even today. Roy Artley was inducted into the American Motorcycle Association Hall of Fame in 1998.