Who Was Wilbur Shaw? 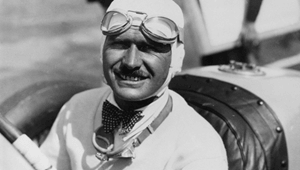 Although Wilbur Shaw was president of the Indiana Motor Speedway for not quite a decade, he played a key role in restoring it to its former glory. He was passionate about auto racing, motorcycles, and a beautiful track where fellow fans could gather. Though known as an automobile racer, Wilbur Shaw’s contributions to racing as a sport and the restoration of the Indianapolis Speedway helped promote the sport of motorcycle racing in Indiana.

Warren Wilbur Shaw was born in October of 1902 in the great state of Indiana. He entered the world at the time that racing was beginning to take off, and throughout his childhood, he enjoyed running, cycling, and even goat racing. By the time he turned 18, Wilbur Shaw had decided that he wanted to build race cars as his career. He promised himself that he would work hard and one day he would win the Indianapolis 500.

After he won his very first race in 1921, Shaw began intense training, winning many Midwest races using automobiles that he built himself. In 1927, he competed in his first Indianapolis 500 and finished in 4th place. Although that was his first experience with the Indianapolis 500, it was not his last. Over the next 13 years, he achieved 1st place in 3 different Indianapolis 500 races. However, during his race in 1941, he suffered severe injuries at the hands of a faulty wheel on his race car. His racing days were not over, but they were halted by a very important event in history: World War II.

A Passion for a Racetrack

During World War II (1939-1945), the owner of the Indianapolis Motor Speedway decided to close its gates, halting both motorcycle and auto races. In the meantime, the Firestone Tire and Rubber Company hired Wilbur Shaw to test a new rubber tire model at the Indianapolis Motor Speedway. When Shaw got a good look of the Speedway’s state, much deteriorated by lack of use, he hastened to contact the owner about making necessary repairs.

Eddie Rickenbacker had little interest in updating the racetrack and told Shaw that he was planning on tearing everything down and building a housing community. Shaw refused to accept this and set to work contacting automobile manufacturers and other potential financial backers. He found a friend in Tony Hulman, a fellow automobile-lover who owned the Hulman & Company grocery business. Hulman shared Shaw’s passion for the Indianapolis Motor Speedway and, despite its run-down, hopeless appearance, he agreed to purchase the property from Eddie Rickenbacker for $750,000. This was the start of a wonderful partnership.

With Hulman backing his efforts, Wilbur Shaw served as the Indianapolis Motor Speedway’s president beginning in 1945. Hulman’s money and enthusiasm combined with Shaw’s industry knowledge saw a rapid restoration of their beloved “500.” The two worked together to restore and improve the racetrack so that thousands of automobile and motorcycle racing lovers could continue to do what they loved most.

Wilbur Shaw died in an unfortunate plane crash the day before he turned 52. However, his dedication to restoring America’s most notable racetrack helped preserve an important piece of Indiana’s motorcycle and racing history.

Rewarded for His Passion