What Was the Newby Oval? 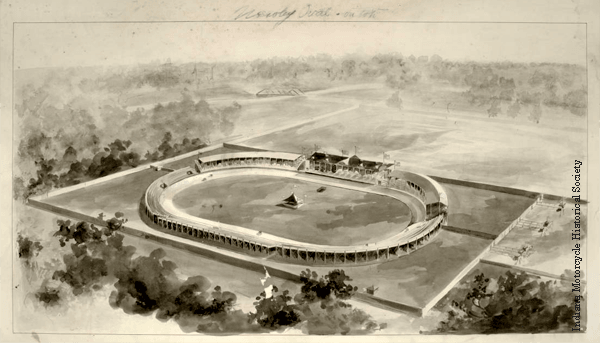 If you are familiar with the Indianapolis Motor Speedway, you may or may not know a thing or two about its predecessor, the Newby Oval. Arthur C. Newby loved to share the racing experience with others, and the Newby Oval expressed (and continues to express) that love to the world.

Known mostly for his contribution to the Indianapolis Motor Speedway, Arthur Newby actually displayed his passion for the bicycle and automobile industry far earlier. Born on December 29, 1865, near Monrovia, Indiana, Newby grew up enjoying cycling. As a 25-year-old, he established the Zig-Zag Cycling Club, a group for cycling enthusiasts that rapidly grew. The Zig-Zag Cycling Club even included two of the other three future founders of the Indianapolis Motor Speedway, James Allison and Carl Fisher.

Later, Newby partnered with Edward Fletcher and Glenn Howe to make bicycle chains and other paraphernalia, which they sold through the Indianapolis Chain and Stamping Company. Together, these three men supplied over half of the nation’s bicycle chains.

Newby regularly shifted from adventure to adventure, especially in the early 20th century. Prior to this, however, he became involved with several more clubs and bicycle manufacturing companies, including the Hay and Willits Manufacturing Company. It was around this time (in 1899) that the Newby Oval was built.

The Newby Oval in All Its Glory

So, what exactly was the Newby Oval? The Newby Oval was a $23,000, quarter-mile track established by Arthur Newby for the purpose of bicycle racing. Herbert Foltz, architect and cyclist, laid out the track for Newby, roughly 6 miles away from where the Indianapolis Motor Speedway stands today.

The Newby Oval featured beautiful pine boards that curved gracefully, nailed down, and slightly rough to prevent bicycle tires from slipping and sliding. Seating arrangements provided space for more than 8,000 people, making the Newby Oval a hot-spot for energetic races.

The first race held at the Newby Oval occurred on July 4, 1898, a patriotic affair with plenty of fun, music, and excitement. Shots were fired into the air after wins and during moments of intensity, making the Newby Oval the place to be.

The Newby Oval continued to hold exciting races through 1902 when it was proposed that automobile races begin being held instead of bicycle races. The Newby Oval was not built for automobile races, so in 1903, it was sold and taken apart. In its place (again, about 6 miles away) would eventually come to the Indianapolis Motor Speedway, founded by Arthur Newby and 3 others.

For a brief time, the excitement of bicycle racing became outweighed by the speed and thrill of automobiles. Eventually, that speed translated to motorbikes, and bicycles (motorized and otherwise) made their comeback. In any case, the Newby Oval has not been entirely forgotten. It played a major role in the increase of racing enthusiasts, and it is remembered for its beauty, as well as the passion of its creator.