Who Was Erwin Baker? 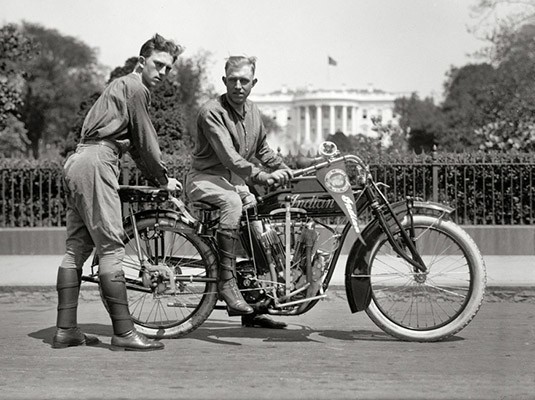 Erwin George “Cannon Ball” Baker was born on March 12, 1882, and played a significant role in the world of motorcycle racing. Who exactly was Erwin Baker, and what is he remembered for?

Baker’s original career of choice was an entertainer. However, after winning a 1904 motorcycle race on a dirt track in Crawfordsville, Indiana, he changed his mind. From then on, he was a racer.

Baker purchased an Indian motorcycle in 1908 and embarked on a series of wins in local races. He was particularly interested in long-distance riding. Often, he made money by promoting various motorcycle and automobile products while embarking on long, record-setting drives. Baker made almost 150 speed runs across the country, over half a million miles in total.

Many of us wonder where the unique nickname “Cannon Ball” originated. While on a boat to San Diego in 1912, Baker decided he was going to break the transcontinental record for endurance driving. He broke this record in 1914 when he drove his motorcycle coast to coast (all the way across the United States!) in a mere 11 days. He would later break his own record, driving coast to coast once again in a mere 6 days.

After his 1914 endurance ride, a writer from New York nicknamed Erwin Baker “Cannon Ball,” a name derived from the Cannonball Express, a train famous for running great non-stop distances.

Erwin Baker spent the early 20th century setting countless driving records, both in speed races and in long-distance runs. His most famous “race win” occurred in 1909 when he won the first race ever held at the Indianapolis Motor Speedway. Additionally, Baker raced at the Indianapolis 500 in 1922, though he did not win.

Baker was interested in cars as well as motorcycles. In 1916, he drove a Cadillac 8 Roadster from L.A. to Times Square in just over a week. Later, he tested a vehicle prototype’s reliability and endurance by taking it on a 4-month-long, 16,000-mile trip, promoting it along the way.

In 1981, Erwin “Cannon Ball” Baker officially earned a place in the Indianapolis Motor Speedway Hall of Fame. In 1989, he was inducted into the Motorsports Hall of Fame of America, and in 1998, the American Motorcyclist Association Motorcycle Hall of Fame accepted him as one of their own.

Erwin George Baker’s most-remembered drive occurred in 1933 when he drove a Graham-Paige model 57 Blue Streak 8 from L.A. to N.Y.C. His 53.5-hour record maintained its ground for almost 40 years and is what inspired that Cannonball Baker Sea-to-Shining-Sea Memorial Trophy Dash (“Cannonball Run”), which in turn resulted in 5 movies and a TV series. In addition to the race and movies, a state historical marker was installed in front of Baker’s Indiana home in 2017, honoring Erwin “Cannon Ball” Baker and his passion for riding.