Who Was Ray Weishaar? 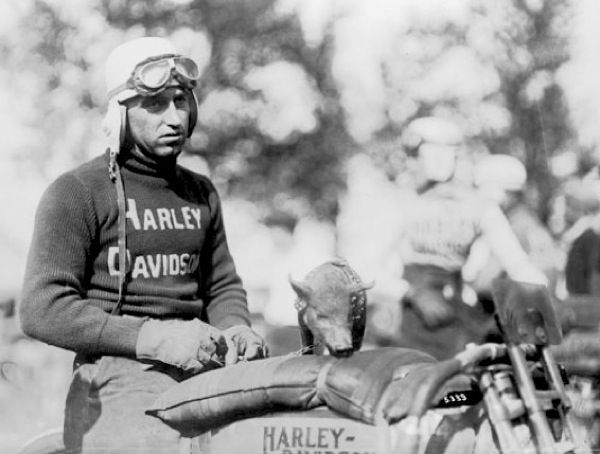 If you are passionate about American motorcycle history, then you have probably heard the name “Ray Weishaar.” A leading man for the Harley-Davidson Wrecking Crew and always up for an adventure, Weishaar continues to inspire motorcyclists today.

On September 9, 1890, Lawrence Ray Weishaar was born in the state of Oklahoma. His family moved to Kansas, where his father tragically died when Ray was only nine years old. Left alone with his mother, Ray had to grow up early, working what jobs he could find to help provide for the family. However, like many young boys working odd jobs at the time, he needed transportation for his work. Motorized bicycles were becoming increasingly popular and were (of course) much more cost-effective than automobiles. Ray quickly saved enough money to purchase his first motorbike, and thus began his era of racing.

Ray Weishaar quickly won himself the nickname “Kansas Cyclone” by racing on countless tracks throughout his home state. In fact, he won the Kansas State Motorcycle Championship twice, even after breaking one of the handlebars off his motorcycle during the second race.

In 1915, Weishaar won a 100-mile race in the city of Pratt, Kansas. He raced fearlessly and passionately, earning himself quite a few fans. In 1916, Weishaar began riding for the Harley-Davidson factory team. He proceeded to win numerous races, including the FAM 100-mile championship in 1916.

In 1920, Ray Weishaar made history by winning the Marion Cornfield Classic Race in Marion, Indiana. He blew the former record out of the water, beating it by 18 minutes.

Ray Weishaar and the Original Hog

Riders refer to Harley-Davidson motorcycles as “hogs” even today, but did you know that Ray Weishaar is the reason why? After World War I was over, Weishaar bought himself a piglet from a local farmer. Since he was part of the Wrecking Crew at the time, the team adopted the piglet as their mascot. Weishaar often took his little piglet “Johnny” on victory laps after winning races. Over time, Harley-Davidson motorcycles became known as “hogs.”

Although he was an excellent rider and representative of Harley-Davidson, Ray Weishaar did possess an unlucky streak in regards to his equipment. During races, he often lost parts from his motorbike, experienced technical malfunctions, and even lost his helmet a time or two. In 1915, his helmet came loose during a 300-mile race in Chicago. He was forced to stop and resecure it, causing him to lose the race.

Weishaar left racing from 1916-1919 (during the heat of the war) to run a Harley-Davidson dealership. Once the war was over and life began returning to normal, he too returned to racing.

Unfortunately, even a 3-year pause in his racing career did not change Weishaar’s luck. On April 13, 1924, at the age of 33, Weishaar experienced an accident that would prove fatal. As he raced against Gene Walker and Johnny Seymour, a collision sent him through a wooden fence. Although he initially appeared to be fine, Weishaar later died at the hospital due to severe internal injuries. Less than two months later, on June 7, Gene Walker also died in a racing accident.

Ray Weishaar was inducted into the Motorcycle Hall of Fame in 1998. The grit and sacrifice of those first motorcyclists have helped shape the sport today. Many lives were lost for the furtherance of racing safety and to encourage the passion for speed and adventure. Legends like Ray Weishaar continue to live on today.